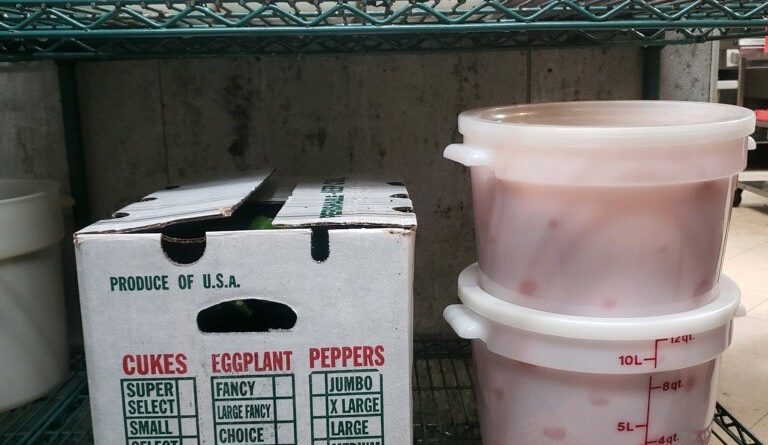 Recently, someone made an extremely critical post on social media regarding a local restaurant here in Brandon. In the post, the person (Original Poster or OP, hereafter) shared pictures of what appears to be inappropriate food handling. The OP indicated they had been “… making all of you guy’s food the past 10 years +…”, while also stating he was fired recently on their 20 year anniversary “… for no good reason.”

We feel compelled to at least attempt to address this social media post, as frankly, we believe it to be inappropriate, regardless of whether there is truth to the post or not. Granted, the pictures in the post appear to be far less than desirable. In addition to the fact there are two sides (or three, as some may say) to every story, we believe there was (and is) a much better way for the OP to get the desired point across, particularly if they sincerely are concerned about the public’s well-being. Many commenters have pointed out things like “why did you wait until you were fired to bring this to the public’s attention?” The response provided by the OP and a few other commenters is that they feared being fired if they said anything about the alleged issues at hand (inferring they would then be without a job). Based on the OP’s comments on the post, it seems they refuse to accept any responsibility for any of the alleged issues at the restaurant, despite apparently working there for 10 to 20 years.

We’d like to consider those comments a moment. If someone is employed for 10 to 20 years (10+ years, and then a mention of a 20-year work anniversary, in the post) at a business where the conditions are as bad as indicated, could the person not have found comparable employment elsewhere, if they were so dissatisfied with the existing work conditions? But yet, they waited until they were fired, before bringing their concerns forward.

In the many comments on the post, during a discussion about going to work at another restaurant, the OP stated:

“I have plenty of options”, as well as “I always have people trying to recruit me.”

With statements like that, how fearful can someone be for 10 to 20 years about being fired for speaking up, when they also have many other options and people recruiting them? Sorry, but that doesn’t exude, “I want to help the public here”. That screams more of “I want to retaliate against my former employer and make them suffer”.

We walked into the local restaurant yesterday and looked around. As best we can determine, we found out a few interesting things about the pictures shared on social media by the OP. First, apparently the pictures were not taken by the OP (as is admitted in their post). Second, the pictures seem to have been taken at different times or days. The way the pictures and post were presented, a viewer may likely conclude all the pictures and alleged issues existed recently and/or all at the same time. That certainly does not appear to be true today. Actually, the pictures appear to be approximately 2 years old (and taken at different times). We obtained new pictures of the identical areas of the restaurant that are portrayed in the original post, and found the areas to appear quite normal and acceptable. Are we emphatically stating that an issue has never existed in reference to the OP’s pictures? No, we are not. But combining all the pictures into one post certainly skews it a bit.

Anyone who has worked in any restaurant knows a few things about the kitchen area, or Back of the House (BOH), of a restaurant. They know that at any time, an employee may fail to properly close a lid, or properly clean up something, etc. How do we know a lid wasn’t removed and a mess was made during a rush at the restaurant, a picture was then taken, and shortly after, the area was cleaned and the lid replaced? What may appear in a picture may have existed for only a few minutes. As a matter of fact, is it far-fetched to think that someone may stage such pictures? We suggest that any of those things are possible… maybe even likely, if someone is so disgruntled and upset that they make such a disparaging public post.

It seems like the post is essentially retaliation for what a former employee feels may have been a raw deal (their firing, perhaps). We encourage the public to consider all aspects of this, as well as the source and the possible intention of such.

We encourage the OP to contact the proper authorities, such as the Health Department, if they see something they find to be unacceptable. We do not believe social media is the proper forum for such a post. While we sympathize with the OP, and wish the person the best of luck in the future, we feel the post and comments are inappropriate and only serve to make the OP look worse. If the intent of the message was to sincerely alert the public, then it should have been brought to bear many years ago… not after the person was terminated.

Imagine this… even if there is some truth to any aspect of the post, how would it make you feel if you knew an employee was working for you, and all the while, taking compromising pictures of your business, so they can paint you and your business in a poor light down the road, after being terminated? That has to be a very uncomfortable feeling for any business owner, manager, or supervisor, in any business. We cannot imagine such a post being a great resume builder for someone. Heck, we’ve spoken to several business owners about this in the last couple days, and were told by one “I wouldn’t even want to be friends with someone who would knowingly take such pictures to use against me if I ever made them mad.”

Please consider all aspects of this, without passing judgment on anyone. By all means, look around at any restaurant you may go to. Check health ratings and read what’s on there. The most recent health inspection and rating should be conspicuously displayed at any restaurant, as well as available online. If you see a problem somewhere, speak up and chat with management at the location, or simply choose to dine elsewhere. If that doesn’t work, contact a higher supervisor or owner. You always have the ability to contact the Health Dept as well. We encourage you to make your own informed decision based on what you know and on your own observations, not from social media posts from someone recently terminated from a business. But please reconsider a desire to post negative pictures and comments about any local business. It’s primarily click-bait online, and it likely exposes the underlying reason for the disgruntled post. If someone knows of an issue at a business, and you’re a part of it for 10 to 20 years, please don’t wait until you are terminated to alert the public of the issues, particularly when if you have other options and folks recruiting you.

Thank you for supporting all our local businesses. Not only are they local, they’re your neighbors.

Area businesses that are known to be Open or Closed