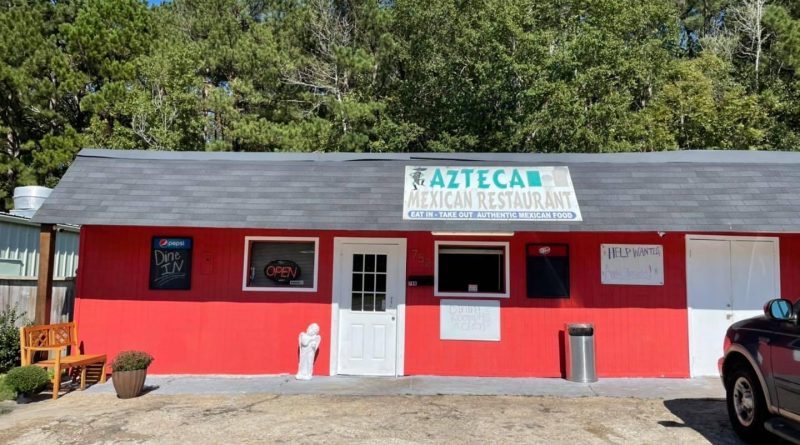 March 7th 2022, BRANDON MS – After a series of visits to CAFÉ AZTECA, with varying dinner guests who provided input, the Unfoodie reports the following:

According to their Facebook Page, Cafe Azteca claims to be the oldest Mexican restaurant in the state of Mississippi, established in 1987. Let’s get a few things out of the way. One, the ambience isn’t as sophisticated as El Sombrero. Two, the vibe is like the best day at El Potrillo. Three, the subterrean location and sketchy parking area are not as smooth as Fernando’s. Four, it was neglected for several years and lost my patronship. Five, Cafe Azteca is the best Mexican food in town.

What about those obligatory chips and dip? The best. I don’t even know why the chips are better, except that they are always warm and the dynamo, one lady staff keeps them coming. The dip is thicker than most, slightly spicier than most (lit me up one night) and they serve it in an adult size bowl, not the thimble sized ramakins in other restaurants. Word of warning: You can ruin your meal with this culinary precursor cuz it’s crazy good.

The portions are huge. Our table gasped when the Chihuahua Tacos were delivered. No human, even a big fat one from Central America, could eat all that. The other dishes simply have stuff piled on it, with the meat and vegetables just overflowing the shells.

Then there is likely the biggest difference: The cheese. It appears and tastes like cheddar cheese that was shredded from a big block purchased at Kroger. Not cheese food or fake cheese (I believe the phrase “fake news” originated from restaurants misrepresenting their fake cheese). Not even the shredded cheese you buy in a bag. Um, this was the good stuff and it covered the beans and I almost had to dig through it to find my tacos. No lie, my beans should have been listed as a cheese dish that has some beans underneath it. I can’t testify to the queso (white cheese) or their rice because those aren’t my bag. Others scarfed it down to the point of requiring napkins, but I refuse to testify. I don’t like it. Anywhere. Even after starving myself before an hour of CrossFit. I wish those had never crossed the border.

If you want my opinion of the nachos, a dish I pretty much eat twice a week, see the cheese comments above. Did I mention that I don’t like white cheese? Well, the nachos don’t have any. When I asked for extra jalapenos, I got a gigantic bowl. Bam.

Since I don’t really do soft shells either, I’ll have to rely upon my dinner mates’ smiles and their pregnant walk out of the restaurant as evidence that the burritos and soft shell tacos are excellent. Probably because they had cheese.

The service is provided by a lady that is all business. And on point. She’s focused. She has a “part owner” air to her. I’m not sure what would happen if she had six tables going at once, but you can bet there would not be a wasted step.

I’m not sure what all that cheese is going to do to my stomach, but I thought I was going to pop as I left. I have no idea how the price compares to others because, by the time the check came, I could not have cared less. I suspect I consumed over 15,000 calories and a few hundred carbs, but that’s just the kind of sacrifice I’m willing to make for you guys. I’m a martyr.

And I know nothing about food. Just be sure to give Cafe Azteca a try.

Their listing in the Brandon042® Business Directory: https://brandon042.com/brandon-business-directory/listing/5071/

2020 Census Numbers for Our Area