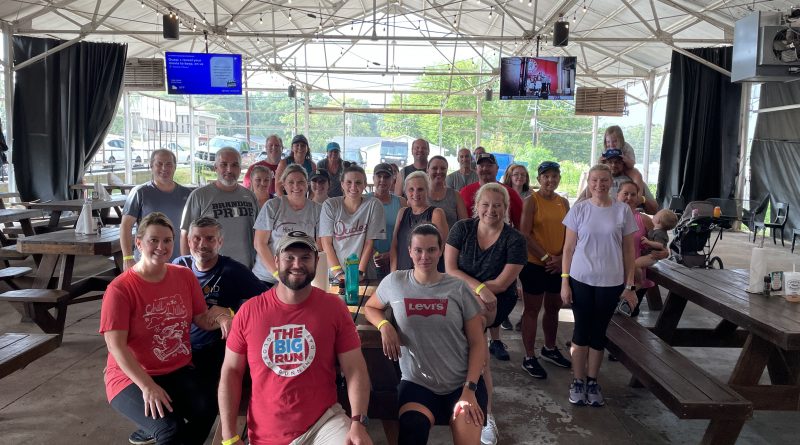 August 2nd 2022, BRANDON MS – There’s a new running club in our area, known as the Rankin Running Club. Members are referred to as “Rankin Runners”. Interestingly, the club is as much about social networking and fun, as it is about true running. The running club gathers every Monday evening at 6pm CT at the B3 Patio (that’s the back patio at Burgers Blues Barbecue) in Downtown Brandon. After some preliminary check-ins, the group embarks on a designated route for the “run”.

While the group has a some avid runners, it also has couples, moms, dads, regular folks, and even some on the, uhhh, less active side! The group will typically run a route that’s 1 to 2 miles in length, in and around the Downtown Brandon area. Some will actually run, but MANY will walk. So the “runs” are perfect for any age group or fitness level. The more avid runners will run the route twice. We asked Rankin Running Club Leader, Rebecca Russell, about the membership mix and what the club is about. “Our group is about getting out and exercising, having fun, and also networking with fellow members, while welcoming people of all fitness and body types.”

The group launched yesterday for their initial gathering. While the weather was far from perfect, approximately 35 members showed up for the launch. The rain came down just as the group began their “run,” but it didn’t damper the group’s enthusiasm. Most of the group made one lap of the designated route, while a few covered the route twice (show offs). But everyone had a great time. Afterwards, we heard rumors that many enjoyed 1/2 off beer at Burgers Blues Barbecue as part of their club membership.

For those interested in having fun and joining the Rankin Running Club, their website is full of information, as is their Facebook Page. Be sure to check out their Frequently Asked Questions (FAQs) on their site, as it will likely answer most questions.