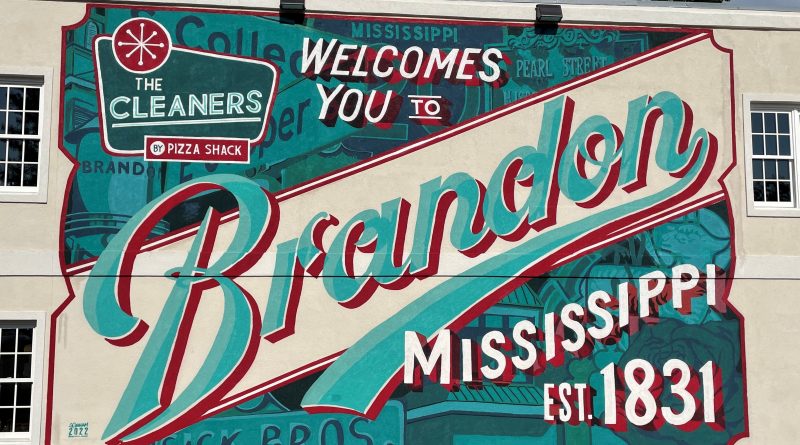 August 19th 2022 – BRANDON MS – By now you’ve probably seen the wonderful mural on the side of the building in Downtown Brandon. The mural is on the west side of The Cleaners by Pizza Shack, located at 237 W Government St Brandon MS 39042. That’s the cool new pizza place with the 50’s retro vibe and beer wall upstairs. The mural serves as a gateway to Downtown, while also being a throwback to many things “Brandon”. Many, including us here at Brandon042®, watched the artist working daily on the mural, taking lots of pictures. We were amazed by the art, the patience, the research (more on that in a minute), the ridiculous skill required, and even the story behind the imagery and the artist himself.

Many of us saw the artist, J Graham Carraway, begin the project on August 9th and wrap up on August 14th. Graham worked around rain on a couple days, working during the day and often at night. He worked approximately 40 hours or so on the actual wall during that time. However, nearly as much time went into the design, approval, and research with the project. The imagery in the mural is a combination of marketing, old town Brandon, with a personal touch. You see, Graham is from right here in Brandon and has always dreamed of changing the physical landscape of his hometown. Having done many projects in other areas, he itched for something here in Brandon. He asked around a bit with city officials and local business owners, asking if anyone was interested in a mural. He was then connected with some guys who were interested in refurbishing an empty former dry cleaners building in Downtown, and turning it into a restaurant. The design and brainstorming began, to come up with a mural that would encompass Brandon from years past.

Graham is a hometown guy, graduating from Brandon High School in 2009, then getting his degree in Business Finance from Mississippi State University in 2013. His art career began innocent enough, when shortly after getting his drivers license, he and an unnamed accomplice thought it would be a good idea to vandalize an abandoned school bus in the woods. While not admitted to anything illegal, he and his buddy spent some time with the bus while Brandon PD traced the tag on his vehicle in an empty parking lot nearby. Being as the vehicle was still registered to his grandparents, they received a wakeup call at 1am, by the curious police department. Things rolled downhill from there… to the parents, then to Graham and his accomplice. After some just punishment, Graham was granted access to a complete wall in the family garage, under the condition that he would not attempt graffiti anywhere else. An artist was born.

After college, Graham worked for an investment firm in Jackson for 2 years. During that time, he began to monetize his passion for art. He also began to realize that the corporate structure wasn’t for him. So he got into the restaurant biz, working as a line cook at the Parlor Market in downtown Jackson. After that, he helped open the Westin in Jackson, and served as the Lead Line Cook for a couple years. On the side, he studied calligraphy and different lettering styles. This led to some gigs doing wedding invitations, posters, and other work. “I told myself that if I made more money in art than I did at the Westin, I’d quit my regular job” said Graham. Doing wedding announcements and invitations got him out of the kitchen, and he hasn’t looked back. He’s now been full time in art for the past 4 years.

Graham is now happily married, and living in Winston-Salem NC with their 2 dogs. His wife is a travel nurse, so they move from time to time… meaning 7 times in the past few years. They’ve traveled all over the U.S., living in New Orleans, Sacramento, Phoenix, Tacoma, Colorado Springs, and now Winston-Salem. Currently, they’re packing up and are planning to move to New Haven CT. Along the way, Graham finds various art studios and schools to connect with.

Graham worked with the owners at The Cleaners by Pizza Shack on the design, beginning in early 2022. They went through many design changes, and worked with the City of Brandon to come up with the right one. Being as Graham grew up here, he had some ideas of what should be in the mural, but spent a crazy amount of time talking to others and researching the project. He spent several hours combing through old newspapers to get just the right imagery. Here’s some details of the imagery in the mural, moving clockwise from the upper left corner:

Lamb Image (on far right side, between “Brandon” and “Mississippi”, just above “PPI” in Mississippi: This is a personal touch by Graham, as it’s the Lamb of God in a stained glass window in First United Methodist Church. He grew up going to this church and recalls staring at this piece, as it was a distraction as a young child.

Arches just above “EST” in EST. 1831: arches from the old location of First Baptist Church in Downtown Brandon.

Just above the arches: Stained glass images from the old location of First Baptist Church in Downtown Brandon.

Middle of mural, just above the “r” in “Brandon”: This appears to be a historic marker, but it doesn’t have anything written on it. It was considered to say “Town Square”, but trying to put the lettering in there seemed to jumble things up a bit. So he left it as it is. If you zoom in, you can make out the wording of “Square”.

NOTE: Brandon042® and Brandon Business Association will be hosting their first Brandon Business Blast at The Cleaners by Pizza Shack on Monday August 22nd 2022 at 5pm. To help celebrate, the restaurant will be offering Buy One Get One Free gyros and wraps from 5pm to close that evening. We cordially invite the public to join us, and welcome this beautiful downtown mural. For more information, click BusinessBlast.net.

The Downtown Brandon mural is Graham’s 3rd here in Mississippi. The others are close by, with one in Jackson at Iron Horse Grill, and the other in the Belhaven District in Jackson. He has another one planned in Oxford, which will be quite large, at about 70′ wide. Not all the designs come to fruition. Graham has created designs in the hopes of completion, such as the own pictured below for the Mississippi Delta area.