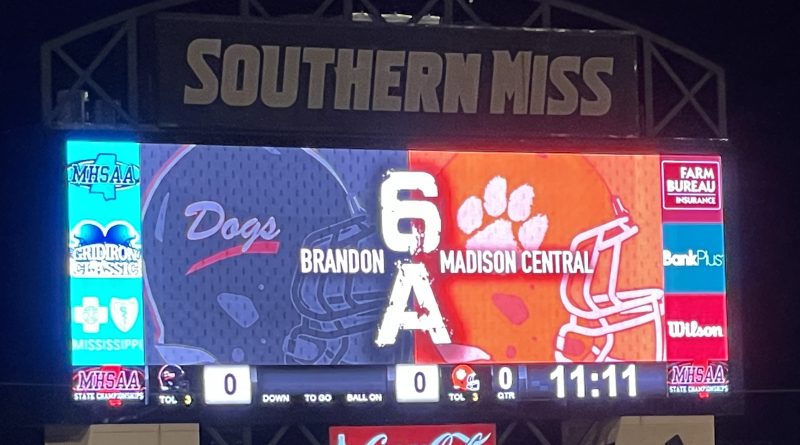 Hattiesburg MS – The scene at “The Rock” (M.M. Roberts Stadium, on the Southern Miss campus) was set last night for a battle of Jackson Metro high schools in the 2021 6A Football Championship Game. Originally to have been played at Veterans Stadium in Jackson MS, the state title games for all divisions were moved to Hattiesburg due to Jackson State hosting the SWAC Championship at the Vet this weekend. Hwy 49 was pretty busy between I-20 and Hattiesburg Friday afternoon, as Jaguar and Bulldog fans trekked south. Although we did not receive official attendance figures, the crowd on the Brandon side was estimated at 8,000+, with about 6,000+ on the Madison Central side.

Madison Central played without their regular starting quarterback Vic Sutton, while Brandon played without their starting RB Nate Blount. Nonetheless, the game proved to be an exciting affair, with back and forth scoring. Brandon received the opening kickoff and established a nice 3 minute drive that ended with a 23 yard TD pass from Bulldog QB Varnes to Miller, to take an early 7-0 lead. Madison Central responded with their own drive, but ended it with a fumble while attempting a dive into the Bulldog end zone. Brandon recovered, for a touchback. At the end of the 1st quarter, Brandon led 7-0.

In the 2nd quarter, Madison Central moved the ball across midfield and down to the Bulldog 17 yard line. Brandon’s defense stood strong and forced a FG, to maintain a 7-3 lead. Brandon’s next drive ended with a punt, with the Jags taking over at their own 41. Madison Central put together a drive of 2 mins and 57 seconds that ended with a 1 yard run for a TD, to take a 10-7 lead with 5:48 left in the half. After the kickoff, Brandon burned 2 mins on the clock and went 3 and out, resulting in a punt with 3:48 left in the half. Madison Central took over at their own 44, moved the ball a bit and then gambled on a 4th and 4 at the Bulldog 20 yard line. Brandon’s defense came up big, stopping the Jags, giving them the ball at their own 24 with just 31 seconds left. Brandon made some noise working their 2-minute offense, but simply ran out of time at the Madison Central 25 yard line. The teams went into halftime with Madison Central leading 10-7.

During halftime, both the Madison Central band and the Brandon band performed together. The bands sounded great together, performing some patriotic songs complete with the American flag displayed at midfield.

Madison Central received the opening kickoff of the 3rd quarter and began at their own 16 yard line. After going 3 and out, the Jags punted to Brandon, who would start their first drive of the 2nd half from their own 35. After a couple runs, the Bulldogs went to the passing game. QB Landon Varnes connected on passes of 30 yards, 23 yards, and 3 yards. After the drive stalled at the Jag 15, Jalen Ballard connected on a 32 FG to tie the game 10-10, with 7:03 left in the 3rd quarter. Brandon consumed 3:20 on 10 plays, for 50 yards. The Jags answered quickly on their next possession. After a 1 yard rushing play, Jag QB Jake Norris hit Isaiah Spencer in stride for a 79 yard TD. After a successful PAT, Madison Central led 17-10 with 6:14 left in the 3rd quarter.

On Brandon’s next possession, the Bulldogs moved the ball on 9 plays for 36 yards, but turned the ball over on downs at the Madison Central 47 yard line. The Jags quickly went 3 and out, punting the ball back to Brandon. With 2:56 left in the 3rd, the Bulldogs turned to RB Jarvis Durr, as he rushed for 30 yards on 6 straight carries. That setup a nice 28 yard pass from Varnes to Durr out of the backfield, down to the Jag 20 yard line. The 3rd quarter ended a play later, with Madison Central holding on to their 17-10 lead.

The 4th quarter began with more action from RB Jarvis Durr. On his 3rd straight rushing attempt, Durr scored with a 1 yard run to tie the game at 17, with 11:44 left in the game. The scoring drive was 11 plays, covering 78 yard, in 3:12, with Durr handling the ball on 10 of the 11 plays (9 rushes, 1 receiption). Madison Central and Brandon traded punts on their next possessions. That setup the Jags with the ball at their own 48 with 7:34 left. That possession ended with Jag QB Jake Norris taking it in from the 2 yard line, to put Madison Central up 24-17.

After the ensuing kickoff, Brandon took over with 3:41 left, from their own 22 yard line. After a rush for 5 yards by Durr, a 4 yard pass by Varnes and then a sack, that setup the Bulldogs with a 4th and 9 from their own 23. On the 4th down play, Varnes went back to pass, scrambled, shed a tackler and threw under duress. Joshua Coe made a great catch over the middle right at the first down marker. However, the play came up about a half yard short, to end the Bulldog threat. Madison Central took over at the Brandon 31 with 2 minutes left in the game. The Jags were able to run a few plays, get a first down, and then run out the clock. The ball game ended with Madison Central winning 24-17.

Fans from both sides were into the game, particularly the student sections. Several former Bulldog players were seen at the game, including Saints LB Demario Davis and MS State QB Will Rogers. The game was exciting, hard fought, and extremely entertaining. Both teams played well and showed good sportsmanship. The statistics were close and exemplified how competitive the contest was. Madison Central’s Pullen led all rushers with 132 yards on 25 carries. Brandon QB Landon Varnes completed 16 of 27 passes for 292 yards and 1 touchdown, to lead the passers. Bulldog Jarvis Durr was a workhorse, as he carried the ball 37 times for 116 yards, while also having 28 yards in receiving. Brandon’s Lester Miller led all receivers with 8 catches for 170 yards and 1 touchdown. Madison Central led in time of possession, holding the ball for 25:20, as compared to Brandon’s 22:40. Both teams had 19 first downs, while Brandon had the edge on overall yardage, 401 to 353. Jag QB Jake Norris was named the game’s MVP.

Madison Central won their first state title since 1999, while Brandon finished as the runner-up for the 2nd time (2012). Our Brandon Bulldogs are actually a young team, with many starters coming back next year. First year coach Sam Williams has certainly put a plan in place that we can all be proud of. The Bulldogs played extremely well, and had a wonderful season with 11 straight wins. While they finished 2nd, this team did what had only been done once before here in Brandon (South State Title), they won 11 straight after opening up with 2 losses, they hosted 3 straight playoff games, and created memories they’ll never forget, while our community got to enjoy the ride.

“Football season in Brandon proved to be electric this year. While the last game didn’t turn out the way we hoped, we played valiantly and brought pride to our school and community. We are proud of these student athletes and are thankful for all they stand for. Go Dogs! #BOE”, from Brandon High School Principal, Dr Bryan Marshall.