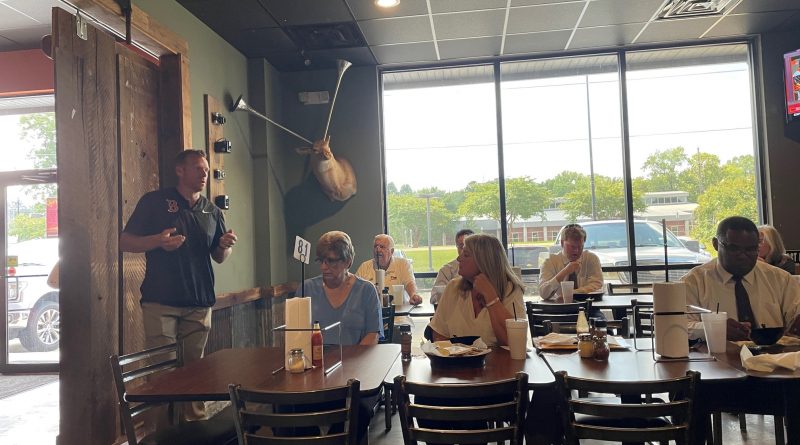 Brandon MS – It was GREAT to have a B Club luncheon for the first time in nearly 2 years today! There was some great food, fun, and Brandon Bulldog fans at Lost Pizza Co for the luncheon today. BHS Principal Dr Bryan Marshall led the meeting off by discussing new projects going on at BHS, including a new state of the art track facility.

After that, a review of the new Brandon Red Fridays was discussed. The B Club is excited about the project, as it should be even better for local businesses and Bulldog fans. There’s 30+ businesses participating in the Red Fridays promotion, all ready to support Bulldog pride with customers. There’s also a new link for the program, at www.BrandonRedFridays.com.

Next up was new Brandon Bulldog Head Football Coach Sam Williams. Coach Williams grew up in the area, and has lots of experience with BHS football from his days at Northwest, Pelahatchie, and Ridgeland. Wow, if you haven’t heard him speak, you’re missing out. Coach Williams is extremely engaging, passionate, and had several of us ready to run through a wall after lunch. Coach provided a preview of the football roster and 2-deep depth chart, as well as tomorrow’s game at Oxford. We’re looking forward to seeing Coach Williams and the Bulldogs in action. From what we hear, he works as hard as the players on the sideline. Coach Williams then spoke about many other sports at BHS, as well as other coaches and what’s going on with them. As the Head Football Coach and Athletics Director, he joked that BHS feels a bit like a community college, with so many team-building activities going on all the time.

B-Club is a booster and support club for all Brandon Bulldog Athletics. If you’re interested in knowing more about B-Club, feel free to reach out to Coach Williams, Dr Marshall, or send an email to: Suz500@RCSD.MS

For more information on Brandon Red Fridays, go to www.BrandonRedFridays.com or send an email to Feedback@Brandon042.com